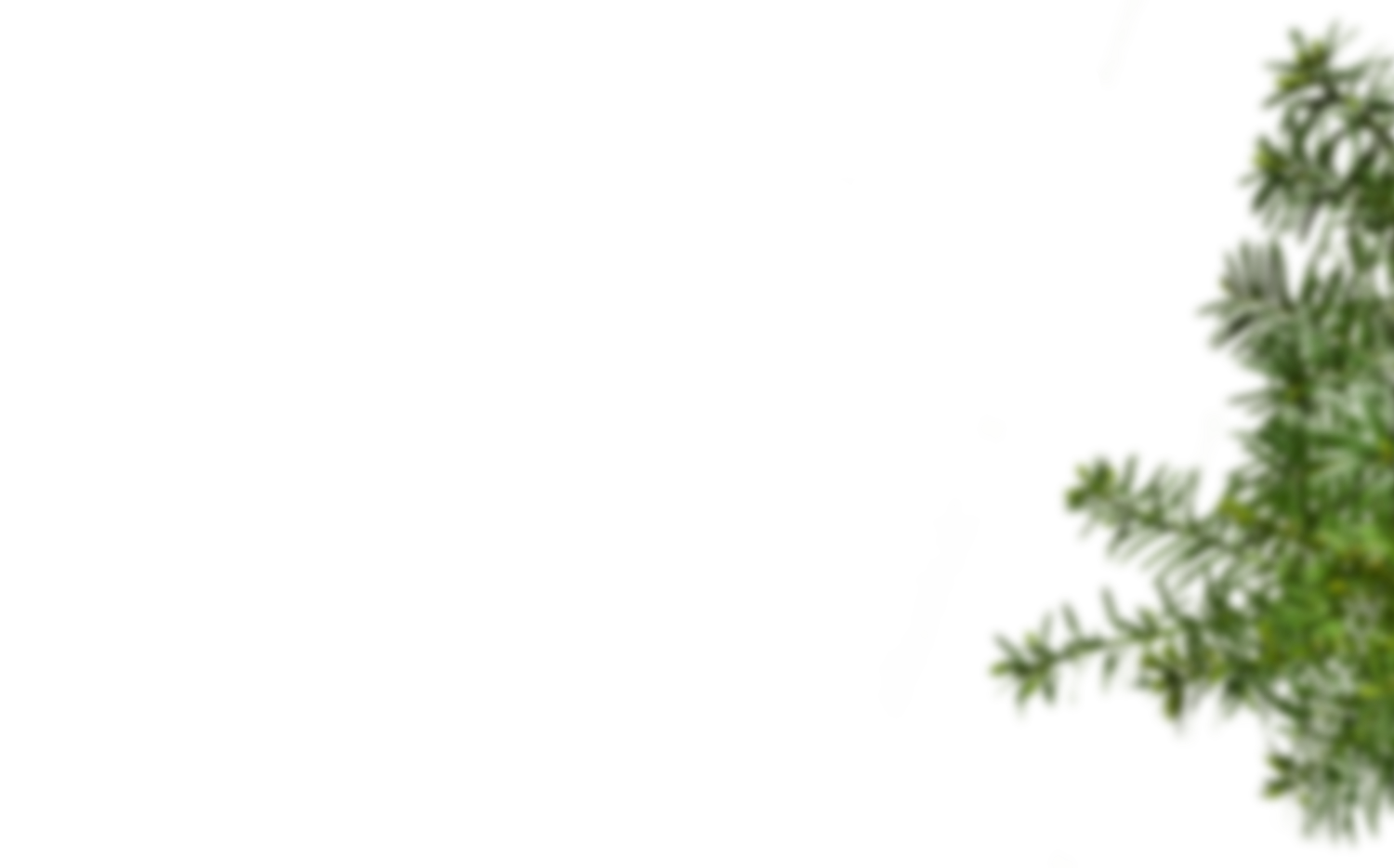 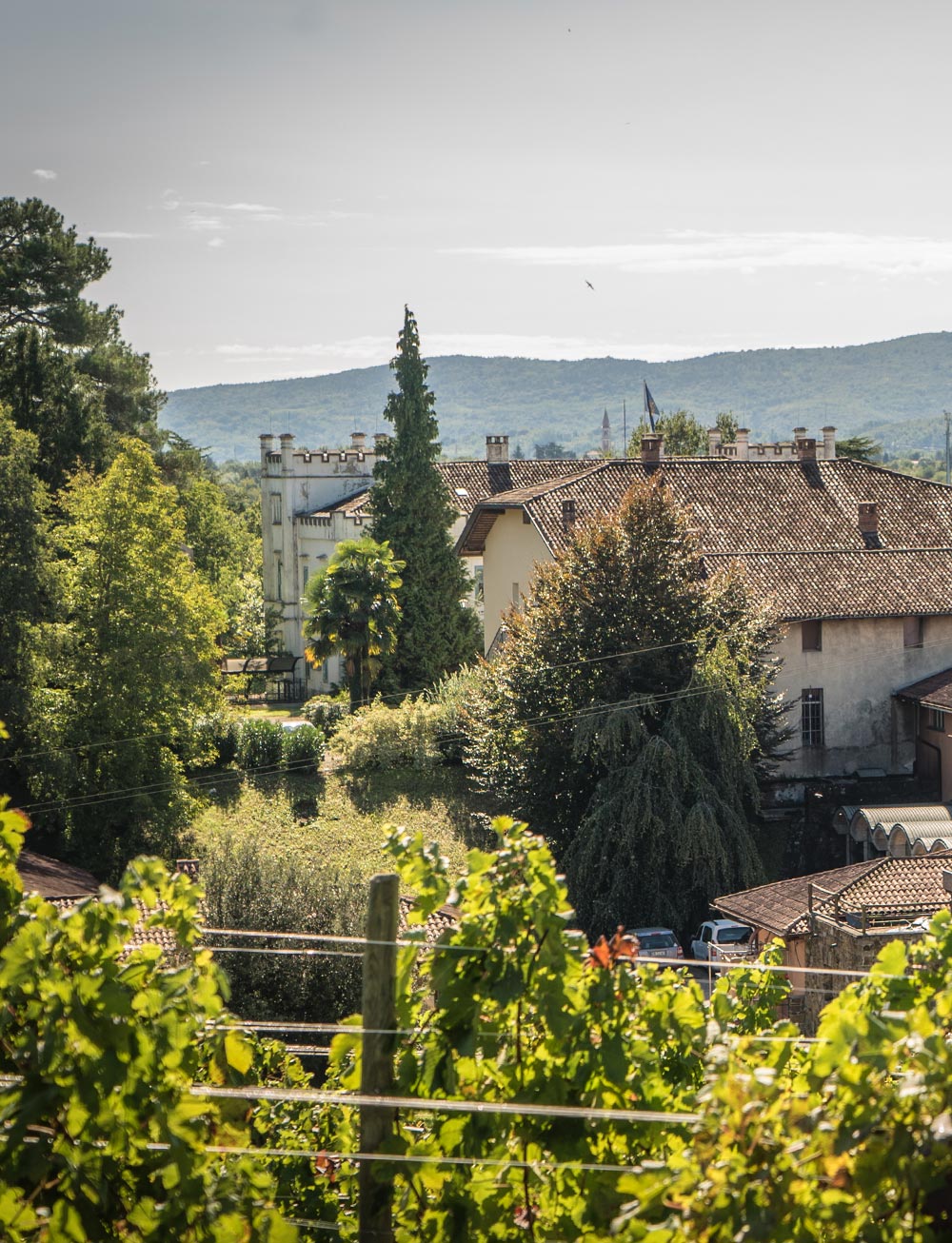 In 1868 Julius Hektor Ritter de Zahony purchased the hill of Russiz Inferiore and gave it to his daughter Elvine upon her marriage. By 1877 the property had already taken on its definitive layout, determined by Count Theodor Karl Leopold Anton De La Tour Voivrè, with two main groups of buildings: the fields, wine cellars and stables on one side, and the villa/castle with its grounds, the school, church and spinning mill on the other. 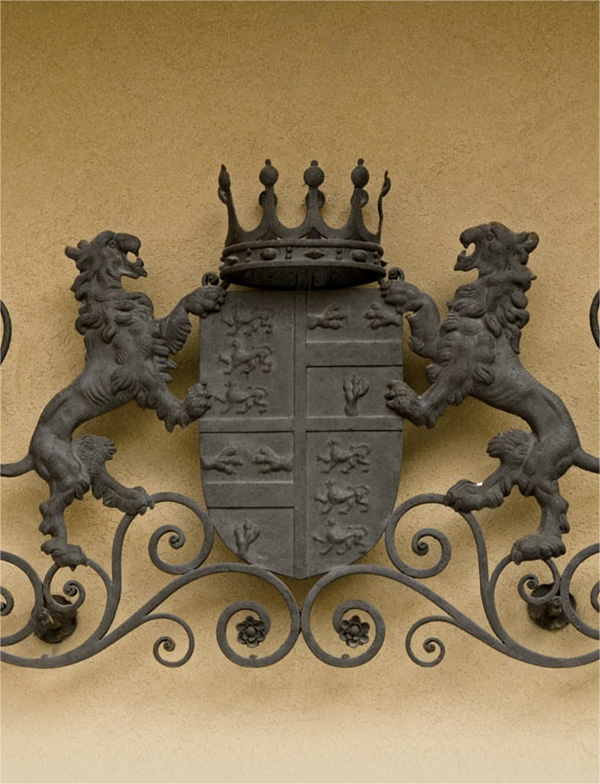 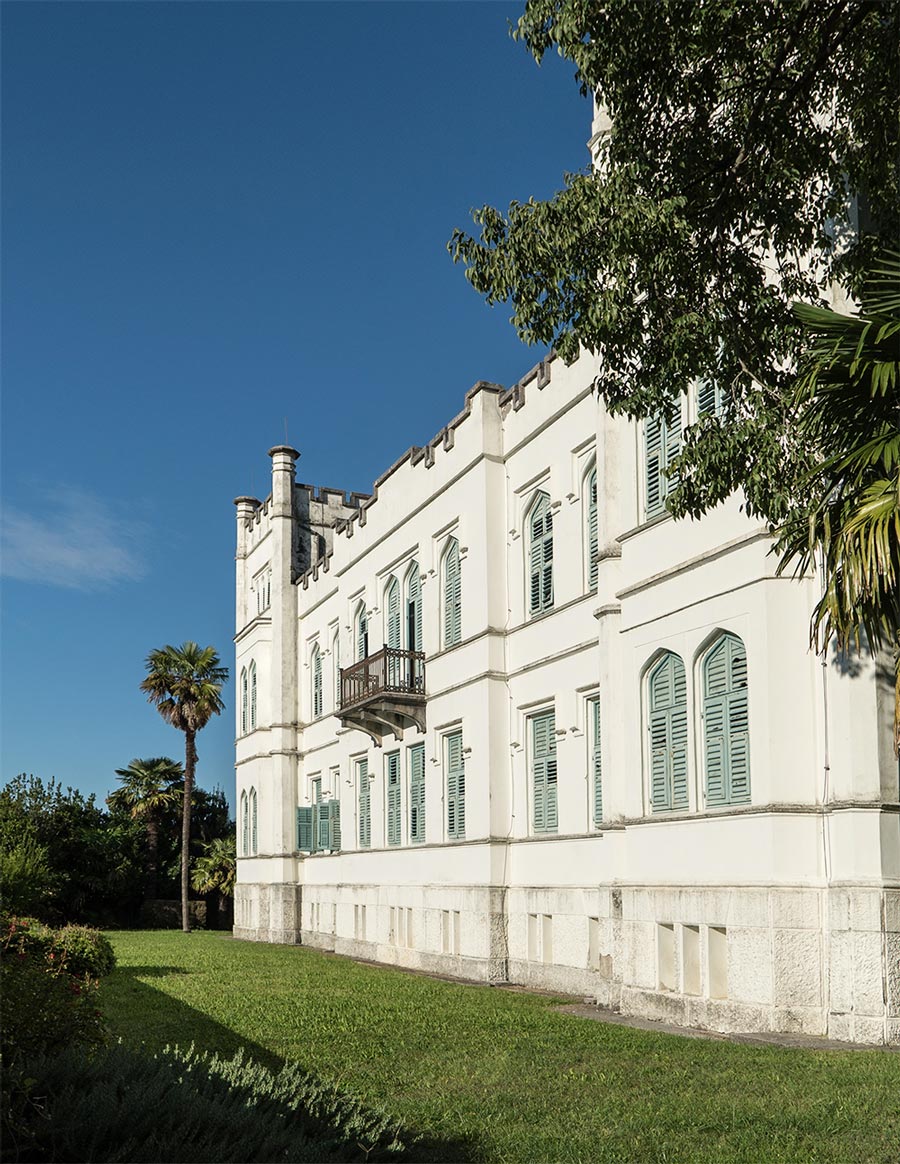 The villa or castle

The home of the Count de La Tour and his family was built between 1868 and 1872 in German Neo-Gothic style, also known as “Spitzbogenstil”, characterised by acute arches, interpreted in Friuli Venezia Giulia in the classical “square Gothic” style.

Though many compare it to the princely castle of Miramare, the villa or castle of Villa Russiz is the only building to have been consistently built in this particular version of the eclectic style in the region. Before main entrance is an arcade on the left, in which there is a well. The L-shaped building has twin towers rising on either side of the main façade. Two stone balconies decorate the façades. The windowsills, the covering on the battlements, and the various decorative surfaces such as that of the well are made of local Aurisina stone.

The rooms are richly decorated with painted geometric motifs, plasterwork, coffered ceilings, wooden beams and majolica stoves. Above the stairway is a painting of Queen Margherita of Savoy, a gift from the Royal Family.

The villa/castle now contains the visitor reception area and administrative and management offices. A number of rooms are used as classrooms for the master’s and post-graduate programmes of the international MIB School of Management in Trieste. 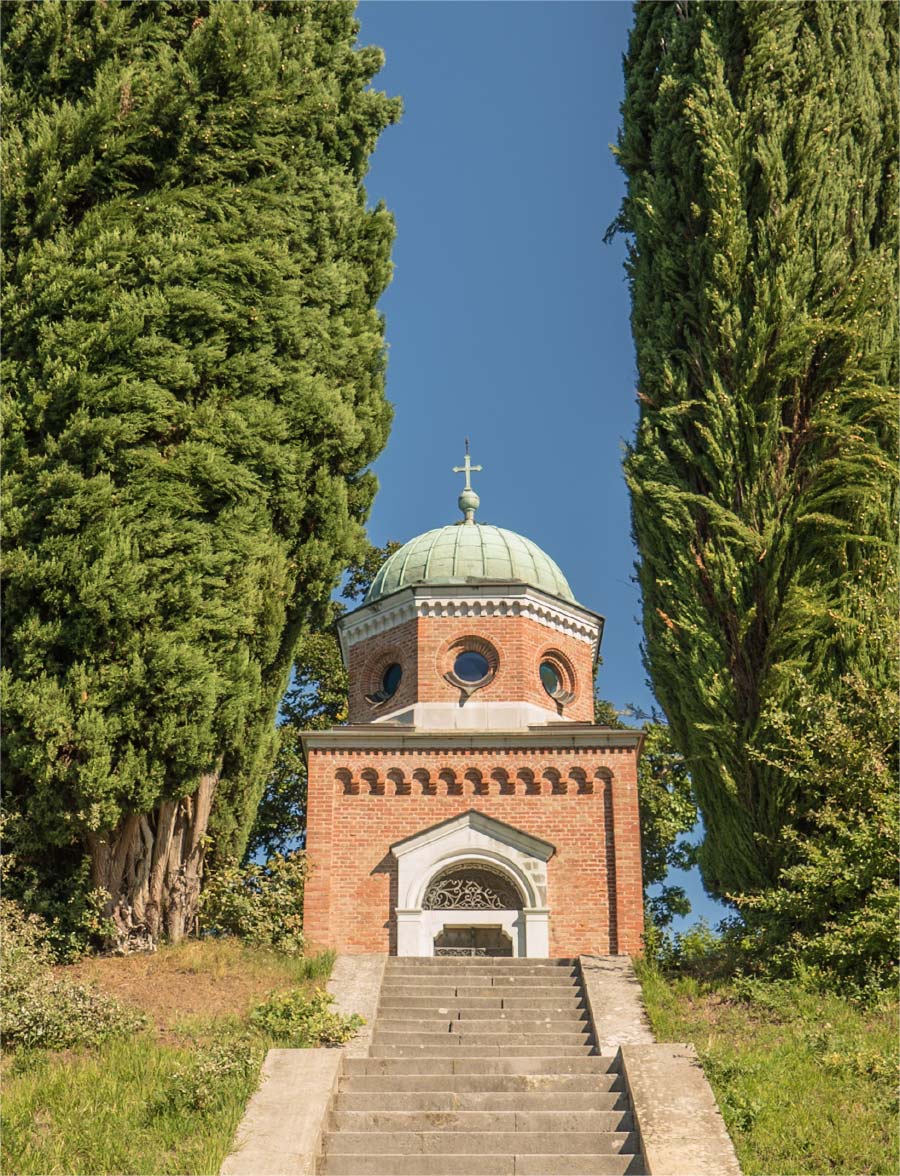 Upon her husband Theodor's death in 1894, Countess Elvine had a mausoleum built on the top of the hill, overlooking the property.

Completed in 1897, this little temple has a square floor plan with a polygonal apse on which an octagonal drum is built, topped by a semi-spherical dome clearly inspired by Italian architecture. This is where the Count’s remains rested until the end of the First World War, after which he was buried beside Countess Elvine in the grounds of the patrician villa of Treffen, in Carinthia.

The mausoleum is also known as the Chapel of St. Joseph, because until 1927 it featured a precious marble statue of St. Joseph by Bertel Thorvaldsen, a pupil of Canova. 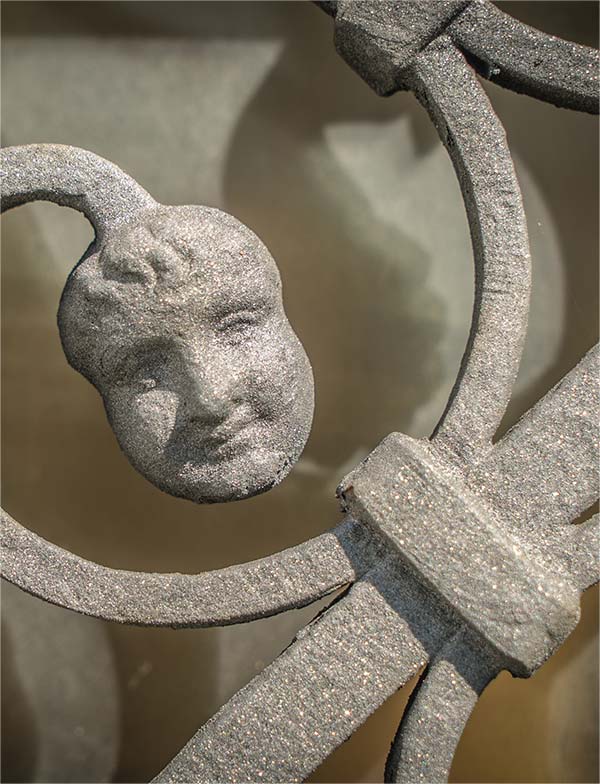 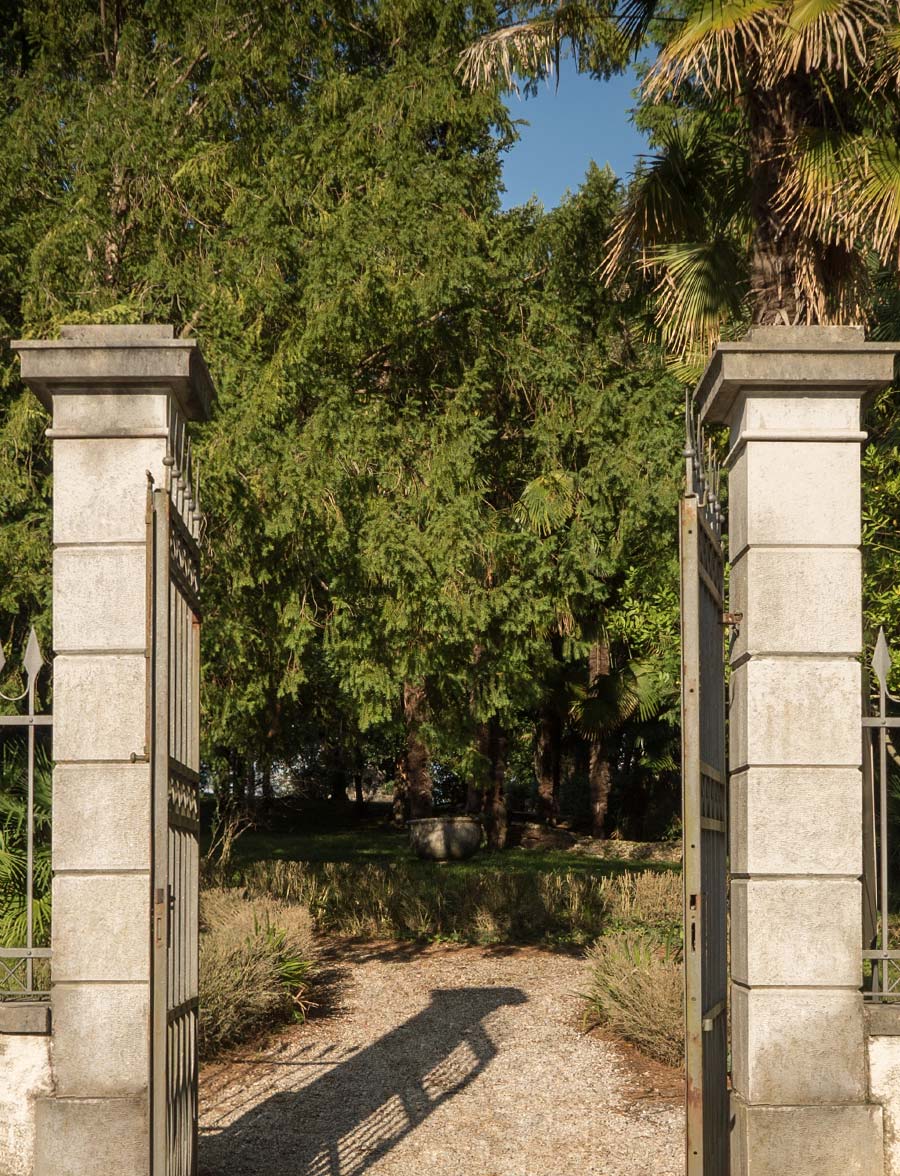 Planned by Count Theodor in the style in vogue in Gorizia and Kustenland in the late nineteenth century.

Avenues starting at the entrance form three concentric circles. The dark green of the trees provides the ideal backdrop for the white walls of the villa/castle.

During the First World War the grounds became a field hospital of the Italian army: new terraces were built to the south, and the existing ones were enlarged, knocking down a number of trees around the clearing. About 650 fallen soldiers rest in the war cemetery at the foot of the little hill.

The grounds were restored in 2009 and 2010 with the intention of recreating the original layout, except on the southern slope, where the curved paths appearing in nineteenth-century maps have been straightened.

The restoration project involved consolidation of the roads and replanting of a number of trees: the most important tree species include an Aleppo pine (Pinus halepensis) and European yews (Taxus baccata) of considerable size near the entrance, two cork oaks (Quercus suber) and various Japanese palm trees (Trachycarpus fortunei) in the Mediterranean garden, an ilex (Quercus ilex) and a common oak (Quercus robur) in the circle, along with a number of swamp laurel oaks (Quercus laurifolia), a species native to North America.

The grounds of Villa Russiz appear in the “List of historic parks and gardens of Friuli Venezia Giulia”. 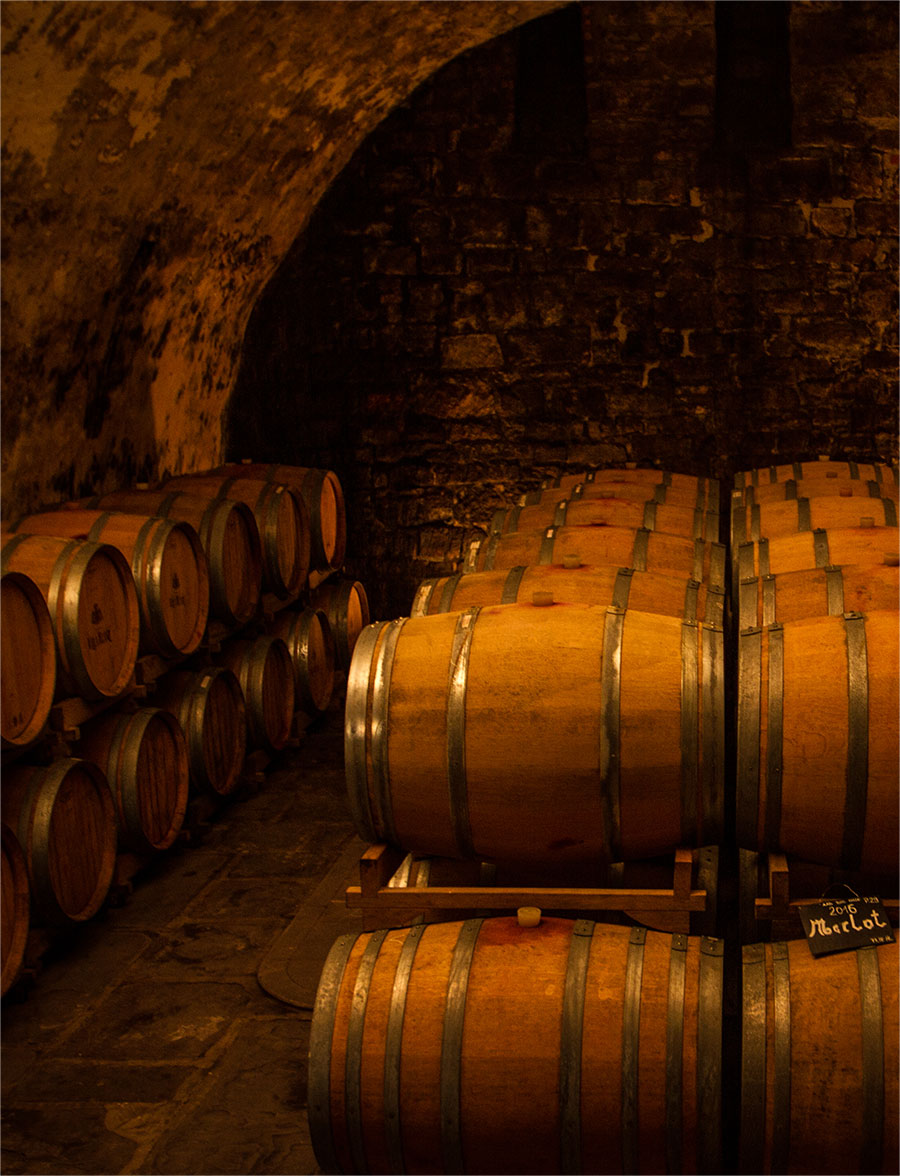 The winery was built by Count Theodor, who had already determined its current layout in 1877. The original core is still intact, accessed via an old stone doorway with the date 1889 carved in the keystone; underneath the large barrel vaults, De La Tour cru wines are aged in barriques and tonneaux of French oak from Allier.